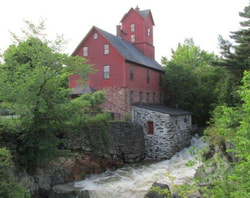 Chittenden Mills - the "Old Red Mill" - in Jericho, Vermont was declared a National Historic Site in 1972. It is one of two remaining mills out of eight that were once sited on the Brown's River's seven water privileges in Jericho. The Chittenden Mills at site number 2 has the longest and most interesting history.

​Prior to 1855, Anson Field Sr. had a cabinet shop and starch mill at this site. His sons ran mills at site numbers 4, 5 and 6. The mill at site number 4 was a chair factory; at site number 5 was a wooden pump and tubing factory; at site number 6 was a sawmill. The Chittenden Mills has changed hands many times. Mr. Field sold out to Mr. Maeck about 1855, who, in turn, sold to James Hutchinson in 1856. Mr. Hutchinson, with money he reputedly made by speculating in cattle and mules during the California Gold Rush days, converted to a stone grist mill on the site. He, in turn, sold to Hira A. Percival and Clark Wilbur. About 1867, the mill and site were sold to Ferdinand Beach and Lucien Howe. Mr. Howe became sole owner about five years later. 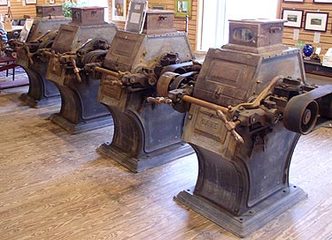 At this time, the mill building was about two-thirds its present size and made entirely of stone. It was a burr mill, using five runs of mill stones, powered by water from the river and employing five or six men. In addition to doing custom milling for local farmers, Mr. Howe milled about 20,000 bushels of western (Michigan, Illinois) wheat and 10,000 bushels of corn. He produced buckwheat, graham, brown and white flour, as well as corn, oat and rye meal for sale throughout northern Vermont.

In 1885, Mr. Howe's son, Frank, became a partner. Major changes were made including enlarging the building to its present size, adding the upper floors and the tower-cupola to house the bucket elevator. The walls above the first floor masonry were made of 2x6" planks laid flat, one on top of the other, a type of construction known as "rampart" style. The supporting columns down the center of the first floor were made from tree trunks, turned on a homemade lathe by local craftsmen. Other work included the distinctive metal siding and the attaching of an older building to the rear of the mill for grain storage. At this time a significant change was made in the milling process. The old mill stones were replaced by the new roller process. This was reported to be the first mill in New England to use this process.

To develop the power needed for this new process and the increased size of the mill, the river channel was deepened by blasting with dynamite - a new and novel method at that time. Contemporary accounts praise the man who did the blasting for his skill in doing the work without damaging the mill walls. When the work was finished, the mill had a 27' head of water to provide power for the water turbines. At this time it was named "Chittenden Mills" in honor of Governor Thomas Chittenden, first governor of Vermont and great-great grandfather of Frank Howe.

Power was furnished by four Tyler turbine water wheels manufactured by Edwards, Stevens and Company of Winooski Falls, Vermont, as were over 20 tons of shafting, pulleys and gears. The grinding was done on the first floor. The second floor was a combination storage and processing area. The third floor also housed some of the processing equipment. Grain was brought to the mill by local farmers and from the Midwest by rail to the Jericho station from which it was delivered to the mill by horse and wagon. Dumped into the elevator bin, it was raised to the top of the tower to fall by gravity to one of the cleaning machines, the scales, or to a bin.

Lucien Howe died in 1899. In 1904, his son Frank, who had managed the mill since his father's death sold the mill to Moses S. Whitcomb. It was about this time that the making of flour ceased at the mill and the roller mills were sold. Instead, flour was shipped in for resale in the area. A modern grinder was installed for feed work. In 1906, the mill was sold to Charles F. Reavy and in 1919, to Carman S. Brush and his son. The Brushes ran the mill until 1937 when it was sold to E. W. Bailey Co., and managed by Kenneth Buxton. The mill was finally closed in 1945 and most of the machinery sold, marking the end of its life as a grist mill. 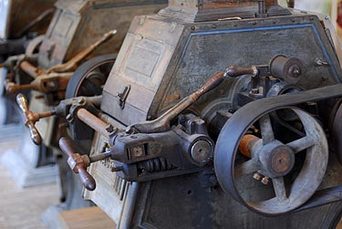 In 1945, the mill and site were purchased by George White. In 1946 his son, Floyd, built the Chittenden Mills Service Station. Space in the mill building was used as an auto repair and paint shop, while the second floor served as a rifle range and basketball court. In 1955 the entire property was sold to Alonzo Bennett and remained intact until 1972. It was at this time that the newly formed Historical Society became concerned about the future of the Mill. At the 1973 March Meeting, the Town voted to purchase the Mill and to rent it to the Jericho Historical Society, which undertook the renovation of the building for use as a cultural, educational and recreational center for the community. A 1975 vote transferred ownership to the Historical Society. Department of the Interior Historic Preservation funds, grants from private foundations, and activities of the Society have been primary sources for renovation funding. In addition, rentals and proceeds from the Craft Shop are used to pay maintenance costs and renovation when possible. New flooring, insulation, lighting and heat have made it possible to use the basement and first floor. Additional funds are needed for approved stairs to the upper floors, rebuilding of the dam with formation of a pond to harness the river for power to generate electricity and, hopefully, to run a demonstration milling operation in the not-too-distant-future.

The entire first level of the building houses the Historical Society Museum, Snowflake Bentley Exhibit and Craft Shop. Priceless mementos of "Snowflake" Bentley, original milling machinery and the products of Jericho's water powered mills are all on display. A self-guided tour folder is available at the craft shop.
The Mill complex includes the Jericho Historical Society Archives.